Jungle Tales Conservation in the Rainforests of Panama for Ages 11+ 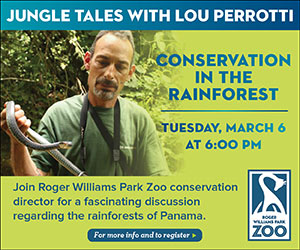 The work of Roger Williams Park Zoo’s Director of Conservation, Lou Perrotti, has taken him deep into the rainforests of South America.  At Jungle Tales Conservation in the Rainforests of Panama for Ages 11+ you will hear stories of encounters with wild animals of all shapes and sizes on his path to protect Panama’s amphibian species, including Panama’s national animal, the Panamanian golden frog.
Pre-registration required for the Jungle Tales Conservation in the Rainforests of Panama for Ages 11+.  All participants age 15 and under must be accompanied by an adult.
Roger Williams Park Zoo, one of the oldest in the nation, is Rhode Island’s number one outdoor family and tourist attraction and is a leader in conservation efforts undertaken by a zoo of its size. The Zoo has received numerous awards for environmental education, and conservation work done locally and around the world, caring for species that without human intervention would face certain extinction. Roger Williams Park Zoo is supported and managed by the Rhode Island Zoological Society and is owned by the City of Providence.