Out of This World Winter Break at KidsPlay! 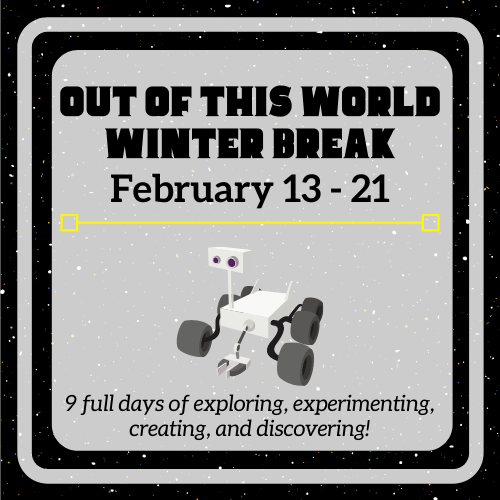 Windsock Creation: Practice using the scientific method with a wind craft and science experiment! Will your hypothesis be correct?!

Presidents’ Day
Gearing up for the Mars Rover landing!
Let’s explore the two presidents that were most influential in starting the space program and man landing on the moon! Do you know who they are?

Space Days at KidsPlay
Perseverance, NASA’s Mars Rover, is finally making its landing – and we want to celebrate! The rover lands Thursday, February 18. We will spend the week exploring all things space through hands-on STEM activities, games, and experiments.

Hide and Seek Moon: Experiment with tools that scientists at NASA use! You will investigate objects that are both near and far. Identify how different cultures around the world view the moon.
Space Guess Quest: Identify various objects in space! You will learn about spacecraft, nebula, galaxies, stars, and worlds. Ask yes or no questions about your opponent’s secret object to find out which object they are thinking of.
Ice Extraction: An oxygen tank has been cracked by a moonquake! It is your job to fix it. Produce oxygen from frozen lunar material!
Rocket Build: Can you build a rocket that will take you to Mars? Pretend you are an astronaut using our hollow blocks and blast off!
And more… Full Moon Dance Party, LEGO Build Contest, and Story Blocks.