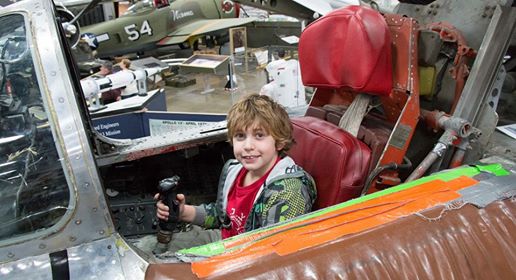 It’s time for Open Cockpit Day & Touch A Truck at the New England Air Musem. Climb aboard cockpits of historic airplanes and helicopters. A variety of aircraft will be open for visitors including the WWII-era Republic P-47D “Thunderbolt,” the Vietnam War era Bell UH-1B “Huey” helicopter, as well as supersonic jet fighters including the North American F-100A “Super Sabre” and the Lockheed F-104C “Starfighter.” There will also be special activities that include climb aboard experiences in historic aircraft; flight simulators, hands-on Build & Fly Challenges, and much more!
Climb aboard cockpits of historic airplanes and helicopters and play pilot. New this year, we will challenge our visitors to Paper Airplane flights. On the new mezzanine in the Civil Aviation Hangar, make an airplane and launch it from above to see how far it flys!
The Open Cockpit program runs from 10:00 a.m. to 4:00 p.m. with the Museum and the Wings ‘n Things Gift Shop staying open until 5:00 p.m. Sneakers or rubber-soled shoes are recommended. Food for purchase will be available.
The New England Air Museum is the largest aviation museum in New England and is a private, non-profit educational institution that was organized in 1959. Three larger hangars and an outdoor display contain more than 80 aircraft with permanent exhibits that include the oldest surviving aircraft in the U.S. – the 1870 Silas M. Brooks Balloon Basket, as well as an S-39 Amphibian plane – the first aircraft built in Connecticut by aviation pioneer Igor Sikorsky. Featured year-round are many historical aircraft and exhibits including a focus on World War II’s Tuskegee Airmen, and a display about Amelia Earhart alongside a Lockheed Model 10 Electra – the same type of plane flown by the female aviator. The Air Museum is dedicated to preserving and presenting historically significant aircraft and related artifacts, engaging visitors through high-quality exhibits helping them to understand aviation technology and history and inspiring students through innovative and hands-on educational programs. It is owned and operated by the Connecticut Aeronautical Historical Association and is governed by a volunteer Board of Directors, with four full-time employees, 18 part-time employees, and more than 175 volunteers. The New England Air Museum is located on 36 Perimeter Road (off Route 75) on the North end of the Bradley International Airport airfield in Windsor Locks, Conn. It is open from 10 a.m. to 5 p.m., seven days a week, and features a large gift shop. For more information, www.neam.org or (860) 623-3305 or Facebook at New England Air Museum.